My primary research interest focuses on how changes in climate affects ecosystem function. I use a variety of statistical tools, including data assimilation (also known as inverse analysis) and multivariate techniques, to address this. My primary computing tool is R (Matlab is a close second).
﻿﻿Effects of altered daily temperature range on desert plants and microbes﻿﻿
During my PhD, I chose the daily temperature range (DTR) as the climate variable of interest, because nighttime minimum temperatures have increased proportionally more than daytime maximum temperatures over the past 60 years (thereby reducing DTR). However, few studies have addressed daily temperature variability as a climate factor. In arid systems, which inherently have high daily temperature fluctuations (hot days, cold nights), a change in this variable could have large consequences on biological processes. Moreover, arid ecosystems have experienced the strongest declines in DTR of any ecosystem.

By decreasing daytime maximum temperatures and increasing nighttime temperatures through experimental shading (see photo above), my research demonstrated that soil respiration rates (CO2 efflux) were increased, while plant photosynthesis (CO2 influx) of the dominant plant species (Larrea tridentata) remained unaffected (van Gestel et al. 2011). This suggests that a reduction in DTR of soil (DTRsoil) could lead to an increased ecosystem loss of carbon. How the interplay of climate-change induced higher temperatures, altered precipitation patterns, and a reduction in DTRsoil will affect the future of arid systems is unknown.
﻿Effects of rapid climate warming on the western Antarctic Peninsula﻿
Nearly 90% of glaciers in the western Antarctic Peninsula (WAP) have retreated as a result of rapid warming, exposing soils that are now subject to plant colonization. Currently, the distribution of the only two native vascular plant species (Deschampsia antarctica and Colobanthus quitensis) on the Antarctic continent is restricted to the WAP.  However, we know little about early ecosystem development. I was awarded a grant by the National Science Foundation to study how warming affects successional nutrient cycling, the transition to plant colonization, and how warming influences that fundamental ecosystem transition in this region.
_﻿Bacterial growth - temperature relationships in hot and cold environments﻿ 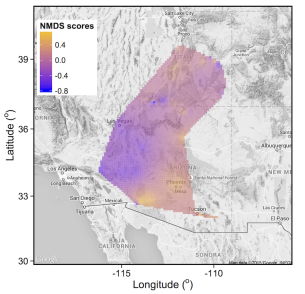 ﻿Drivers of soil microbial communities in the arid Southwest US﻿
In collaboration with scientists at NAU, and as part of an outreach effort involving high school teachers, we are investigating patterns of microbial diversity and community structure in aridisols of the southwestern United States. Using sequencing data, I used a non-metric dimensional scaling (NMDS) approach to assign values of community similarity in soil samples taken across the study area. I interpolated the values to obtain a similarity map and overlaid it over the landscape.

Climate data and soil properties, including pH and soil organic matter, were collected from each site. Using a structural equation modeling approach, I am quantifying the relative contributions of climate and soil properties on community similarity (McHugh et al. in prep).

﻿
Figure: Scores from one axis in non-metric dimensional scaling ordination were used as similarity index to represent similarity of soil community communities from 100 sites. I then interpolated similarity values across the study area. 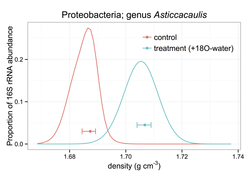 ﻿Stable Isotope Probing as a quantitative microbial ecology tool﻿
Conventional Stable Isotope Probing (SIP) on microbes only provides a qualitative measure that identifies what microbes incorporated a heavier element. In a collaborative effort, spearheaded by Bruce Hungate, SIP was modified to provide a quantitative measure of heavier element incorporation. I helped with bootstrapping the data to provide confidence intervals for the degree to which individual microbial taxa become heavier, while taking into account the individual taxa's density (Hungate et al. in press). This novel approach can be used to quantify microbial activity at the taxon level. A promising tool in a variety of experiments (e.g. priming experiments) to answer: what taxa are responding to your imposed treatment and by how much? More detail is available her﻿﻿e.﻿


Figure: Example of how 16S rRNA copies are distributed along a density gradient for one taxon belonging to the Proteobacteria. With this taxon's incorporation of isotopic water (18O-water) the density of this taxon's DNA has become heavier, showing an upward shift. This type of label (18O-water) is used to determine what organisms are active in the soil (Blazewicz & Schwartz, 2011, Microbial Ecology 61:911-916).